The Philippine’s southern island of Mindanao was hit by a series of strong earthquakes on the month of October. A magnitude-6.3  on Oct 17, magnitude- 6.6 on Oct 29, and a magnitude-6.5 two days later on Oct 31 causing major infrastructural damage not only to the province of Cotabato were the epicenter was located, but also to the nearby provinces where major cities like Davao are located. Residents living in the area were already reeling from having to deal with hundreds of aftershocks following each major quake, now have to deal with the trauma that comes after. 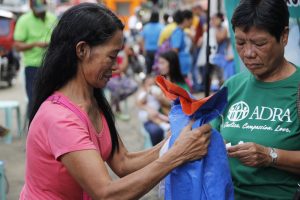 When the 1st earthquake hit Oct 16, ADRA’s staff in the Philippines Edwin Rivera and Katherine Solilapse, were able to distribute 300 shelter kits the following week to the municipality of Makilala in the province of Cotabato  (where the epicenter was located) for the families whose homes were totally destroyed.

When the 2nd earthquake hit the morning of Oct 29 with it’s epicenter also located in Cotabato, Jerry Requillo, another staff member, was sent down on the same day to conduct assessments and facilitate the distribution of Cash Assistance to municipality of Tulunan.

When the 3rd one hit 2 days later, come buildings whose structural integrity was already damaged in the previous 2 quakes finally came down trapping and killing 10 . The earthquakes also caused landslides that covered homes adding to the increasing numbers of casualties in the region.

(translation: The homes that I visited yesterday that had cracks, today they are gone…. they finally collapsed).

(translation: I was able to meet the Barangay Captain of Batasan that died in collapsed Barangay Hall when we distributed (shelter kits) there. He gave us some snacks because that was our last distribution site. He shared with me that he was also an Adventist).

VIDEO from 1:22 : (ADRA Tarps used in the evacuation center in Makilala, Cotabato)

ADRA in the Philippines has conducted 2 NEMP (National Emergency Management Plan) Responses in relation to the 1st 2 earthquakes. The NEMP Responses in the Philippines are set up by ADRA in partnership with the Seventh-day Adventist Church, to be able to mobilize emergency responses quickly within the country. The funding for these responses comes from ADRA International and Regional offices, with counter-parts from the local Adventist conference or union.

Assessments are now being done to be able to evaluate what next steps to take in tackling the bigger damage that is a result of the 3rd one.

The Philippines is located within the Pacific Ring of Fire, which “is a path along the Pacific Ocean characterized by active volcanoes and frequent earthquakes” (National Geographic Encyclopedia), and has experienced many earthquakes in the past. Phivolcs (Philippine Institute of Volcanology and Seismology) explains that Cotabato one of the seismically active regions in the Philippines due to several active faults in the area. Phivolcs says that one of the theories they are exploring is the possibility of  these earthquakes being interconnected.

“In that area, you have several closely placed faults, near to each other. It’s possible that one fault would trigger another fault to move” – Dr. Teresito “Toto” Bacolcol, Associate Scientist, Phivolcs.

Whether the last 3 earthquakes will be followed by more intense ones, one cannot be sure. Residents in the area are warned, never-the-less, to always be prepared… to have always have “go-bag” or emergency kit nearby to be able to evacuate at any moment.