For Teacher Ella, the Trauma is Real 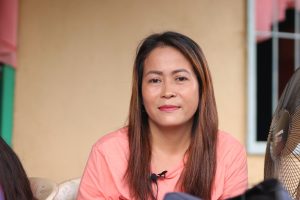 Teacher Ella is an Elementary School Teacher in the Municipality of Magsaysay, Davao del Sur, who is a single mom with 2 kids. She has not slept in her home since October 16 because she fears another earthquake may happen again (which it did).

When asked to share her story, there were 3 parts which was naturally divided into the 3 different earthquakes.

When the first earthquake struck on the evening of Oct 16, she was outside cleaning her yard and her kids were inside, playing. The shaking didn’t last that long, but it was strong. She saw her 2 helpers run outside the house, but didn’t see her kids, so she ran inside while the shaking was at it’s peak and grabbed her kids that were playing in their room.

“This was the first time I felt an earthquake that strong. It’s a good thing that it was still quite early and we weren’t asleep because a full cement piece (hollow block) fell from the roof and on to my child’s bed.”

As the days passed, she began to relax. Because who would think that an earthquake would strike twice? On the morning of Oct 29, she was in her classroom. She had full attendance and in full teaching mode when the 6.7 Magnitude Earthquake struck at around 9am. She shouted at her kids to drop, cover, and hold just as they had practiced during their earthquake drills, but the kids didn’t listen, and instead rushed for the door, with one of them bumping into Teacher Ella causing her to tumble onto the floor.

“The government requires us to always have fire and earthquake drills. But when it actually happens, it is very difficult to control the kids, especially that have been traumatized already. The fear takes control.”

When she got home, she discovered that all the glass windows were broken and the cracks on the wall had gotten bigger.

Just as before, she never expected the 3rd one to hit. School was cancelled for the week because of the infrastructural damage that the school incurred and Teacher Ella was at home having breakfast with her kids in the tent that they had set up in the empty lot close beside her house when it did. They had gotten used to feeling the aftershocks, but when the 3rd one struck, their table got overturned scattering their food and plates everywhere. Her kids’ nanny (who was an elderly woman) fainted from fear after she got out-balanced on the chair she was sitting in.

When asked what is an unmet need that she sees in the community, she said that their community was very fortunate that even if it is located more than 15 kilometers away from the main highway, they were still accessible by road unlike some of the other barangays located up in the mountain whose access was blocked due to landslides which was also caused by the earthquake. They may not get aid as often as those towns beside the main road, but some aid was still able to come. And other organizations who wished to bring more aid like food, clothing, personal hygiene items, and other items that would help make their stay in the “tent-cities” more bearable like mosquito nets or lamps to use at night, would be godsend.

When asked if there was anything else she wanted to add, her role as a teacher came out.

“As I look around, even to myself, I realize that the trauma is very real. You see kids getting surprised really easily, whether it be a dog barking or a car passing by, you see them jump in surprise. I think, just as we need our basic necessities, we also need help in dealing with the trauma that these earthquakes have left. We can adjust to a difficult life with just the bare necessities, because we grew up like that, with no running water and electricity. But this trauma is something else.”